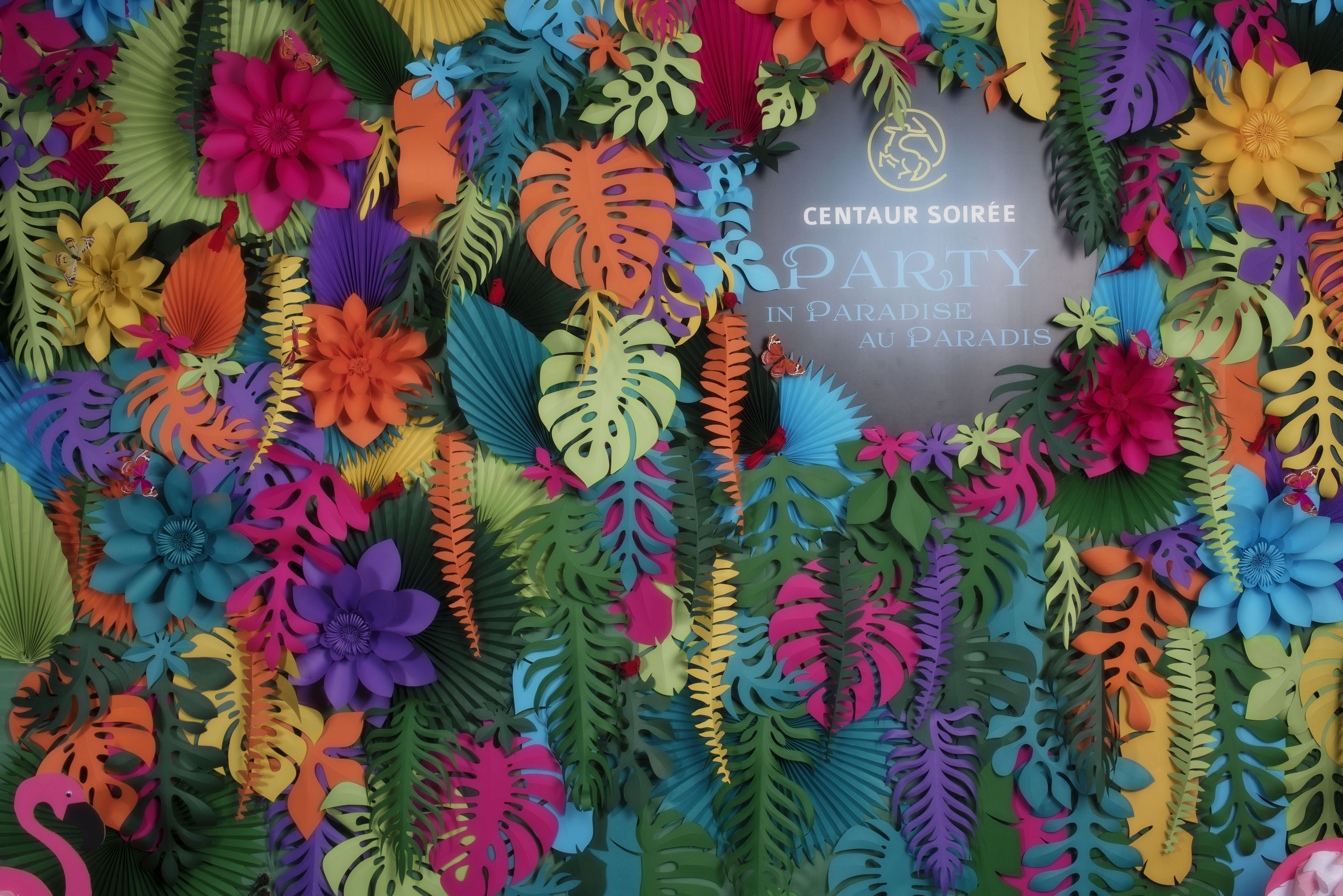 Montreal – On November 5, Centaur Theatre’s Artistic and Executive Director Eda Holmes and the Theatre’s Board of Directors, Chaired by Michael Baratta, hosted Party in Paradise, Centaur Theatre’s 2019 Gala. Those in attendance were regaled with a glorious night including a spirited auction guided by CJAD’s Aaron Rand; sold-out Treasure Chest prizes, this year’s game of chance inspired by the tree of knowledge and its tempting fruit, hosted by CTV’s Lori Graham; a fabulous silent auction that wrapped around the gallery; an outstanding cocktail dînatoire on the Centaur stage; and immersive entertainment taking place throughout the theatre, with live violin music, sinful songs, a smoking Adam & Eve tango performance, and a mirror-ball Dance Hall. The enchanting party raised $160,000 by the time all the angels went home.

The brisk night air disappeared as people made their way up the grand theatre steps. Inside, a lush wall of tropical cut-outs of gorgeous flowers and humongous green leaves (recyclable!) played host to red birds and butterflies. Overhead were floating puffy clouds. Decorator extraordinaire Roberto Menegati proved once again his imagination is unstoppable.

Winding vines, fresh flowers, lifelike parrots, flamingoes, and blue velvet completed the look throughout the main floor, as white papery butterflies led the way up the stairs, ending in a divine passage to the main theatre party space. Guests eagerly signed up for ‘Temptation’, a semi-private sitting with the Prince of Darkness, brilliantly performed by Nadia Verruci, and were led down to the bowels of the theatre to Satan’s Speakeasy, where soulful singing and Red Devil cocktails were flowing.

True to its name, Party in Paradise, featured themed areas Heaven, the Garden of Eden, and the Underworld; tying in to Centaur’s anticipated show of the season—an edgy and modern retelling of Paradise Lost. Gala attendees came together having taken a bite of the apple that is Montreal’s award-winning English-language theatre, opening their hearts and wallets to show their support. Speaking beneath a gorgeous painted backdrop of immense, celestial white wings, Holmes thanked everyone,

We are honoured to have tempted you here to join us tonight in our theatrical paradise. You see, temptation isn’t always a bad thing…” adding, “The proceeds from this heavenly event help us put great stories well told on stage year after year in the heart of Montreal. Your generosity means so much.

Ticket revenues cover less than half of the theatre’s annual expenses. Funds raised not only allow Centaur Theatre to produce high-quality professional theatre in the heart of the city, but also covers initiatives such as Theatre of Tomorrow and Saturday Morning Children’s Series. Contributions allow Centaur to employ over 200 local, national and international theatre artists each year and maintain a valuable heritage building.

Since 1969, Centaur Theatre has been telling great stories well told. This annual gala fundraiser is an occasion to celebrate the theatre’s rich legacy and guarantee its vital future.