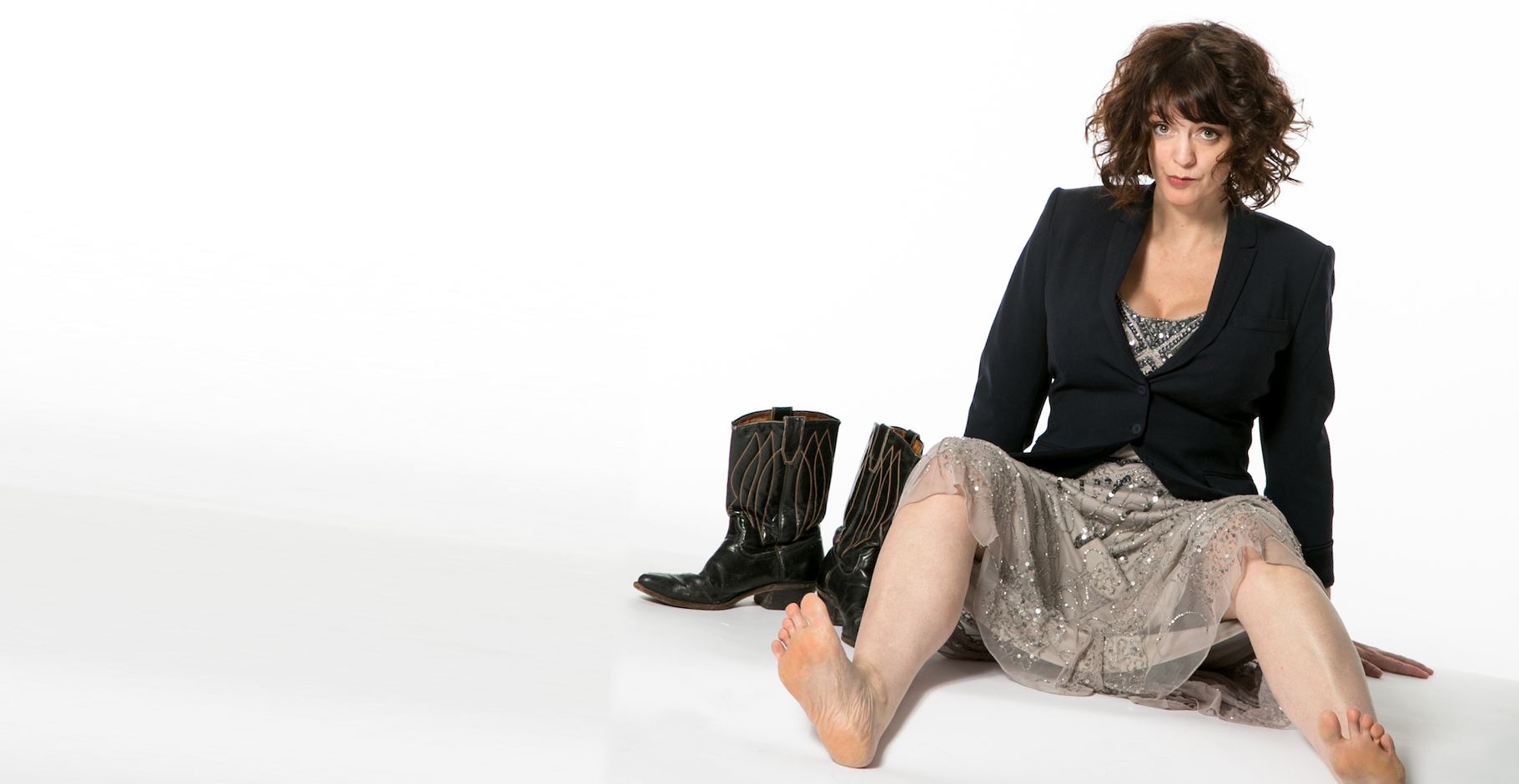 Rebecca Northan, writer and director of All I Want for Christmas, has spent her career being serious about comedy.

Centaur audiences will remember her hit show, Blind Date, from the 2019 season, but this Renaissance artist has many successes under her belt. What each of Northan’s creations has in common, whether scripted, fully improvised, or a hybrid of what she deems ‘spontaneous theatre,’ is a message of love, empathy, playfulness, and misbehaviour all wrapped in a comedic bow.

Northan’s theatrical roots can be traced back to the Loose Moose Theatre in Calgary, Alberta, where she took her first steps on stage in the improvised format, Theatresports, invented by Keith Johnstone. She also attended the University of Calgary where she studied classical theatre with Stratford Festival alumna Pamela Brook. It is this simultaneous steeping in both improvisation and Shakespeare that Northan credits with her ongoing obsession with works that are highly structured improvisations (like Blind Date).

“Pamela and Keith’s offices were side by side at the U of C, and each of them posted quotes on their doors meant to inspire. Pamela’s door had a famous quote from Hamlet, ‘the readiness is all,’ while Keith had posted ‘Don’t be prepared’ on his. I realize that ‘young me’ internalized both these quotes and they have become a guiding principle in my work.”

When Northan’s most widely recognized production, Blind Date, first started touring in 2010, she was approached by an audience member in Winnipeg who wanted to know what this style of theatre was called. At the time, Northan had no name for it, but eventually settled on the term ‘spontaneous theatre’, which has since become the name of her production company.

“I wanted a term that would reflect the writing and narrative rigour that goes into a production, while also indicating that improvisation remains a huge piece; ‘spontaneous theatre’ seemed to capture that. When I’m working on something fully scripted, like All I Want for Christmas, I still want there to be a sense of spontaneity; often I will invite actors to find their own moments to improvise something slightly different each night. I find it keeps things electric and an audience can feel it.”

This alchemy seems to be paying off. Northan has had many successes over the last decade. Undercover—in which an audience-member-turned-rookie-detective is tasked with solving a murder—has toured three major companies in Canada (Toronto’s Tarragon Theatre, Calgary’s Vertigo Theatre, and the Citadel Theatre in Edmonton).

Legend Has It, a family-friendly fantasy adventure, premiered at Alberta Theatre Projects’ playRites Festival and went on to play the prestigious Brooklyn Academy of Music in New York. Had the world not been shut down by COVID, Northan’s newest creation, An Undiscovered Shakespeare, would have had its world premiere at the Stratford Festival in 2020.

While many refer to Northan as the “Improv Queen of Canada,” it’s a title that she’s not quite comfortable with.

“Canada is full of amazing improvisers. So many. No kings, no queens! And, I’ve never been just an improviser. I’m always striving to bring both sides of my training to the foreground. I act, I improvise, I direct, I write, I produce—well, let’s be honest, I’ll do anything in the arts that pays me a dollar! But, as I get older, I find that I am enjoying the writer/director mantle.”

Northan’s scripted works bear her signature brand of humour and heart. Her first play, Kung Fu Panties, an ode to all-female action movies, was so popular during its Calgary run that posters were stolen from the marquee in front of the theatre.

“Slipper and Zorro were so much fun, because I was co-creating those with two of my oldest, dearest friends: Bruce Horak and Christian Goutsis. We all started our careers around the same time and have been in lots of productions together. We share a similar sense of humour, and have a shorthand that keeps the work fast and fresh. I tend to write the drafts of the script, Bruce and Christian help punch up the jokes, then they collaborate on sound design and composing. We really want the script and the music to be a full package—it makes the comedy better. We like to call ourselves “The Giggle Gang.”

“Bruce and I met in 1995 doing Shakespeare in the Park. He is my favourite human to work with, and yeah, we were even married for a short stint. We’ll always work together – he is quite possibly the most talented person I’ve ever met, and I feel so grateful that we continue to be best friends and collaborators. He’s been my sounding board on All I Want for Christmas since its inception, so I am thrilled he was available to design sound. Comedy is music, and Bruce is a genius at it. He’s going to hate me putting so much pressure on him like this, but too bad!”

All I Want for Christmas is the result of Northan seeing a 2020 Facebook post by Cape Breton artist Wesley Colford, Artistic Director of the Highland Arts Theatre. They were looking for a holiday comedy that fit these criteria: “three actors or less, preferably Canadian, preferably written by a woman.” While several replies suggested ‘no such play exists,’ Northan messaged Colford immediately offering to write something for them.

Christmas was my mom’s favourite time of year

“We were in the middle of our second lockdown, so the timing could not have been better. Christmas was my mom’s favourite time of year—she passed away in 1996—so the character of Marge is named for her. I like to put all kinds of personal truths in my plays. I won’t tell you ALL of them—I’ve got to keep some secrets—but things like Marge working at an answering service in high school or numbers making her cry,  those are things that are absolutely true about ME. The audience can have fun guessing what else might be true… or not true!”

“I feel a bit guilty as the director. These actors are so good, so skilled, so FUNNY, I feel like I really don’t have to do much at all. I make the tiniest suggestion and they run with it. I spend all of my time in rehearsal wiping tears out of my eyes, I’m laughing so hard… until I’m weeping a bit because they’ve moved me so deeply. They’re amazing.”

Northan will return to Montreal in February to teach at the National Theatre School of Canada. This will be her second year offering a section on improvisation to the first year students. When asked about future plans, she offers, “I’m doing a bit of online teaching for the Stratford Festival, and I’m writing a new one-woman show, called Burning Down the House, about how the women of GenX are dealing with menopause.

Eda Holmes has been mentoring me and once I cough up a draft, she’ll dramaturg and direct… I hope! Beyond that, who knows?! Some film and TV if I’m lucky. Only the theatre gods know for sure.”