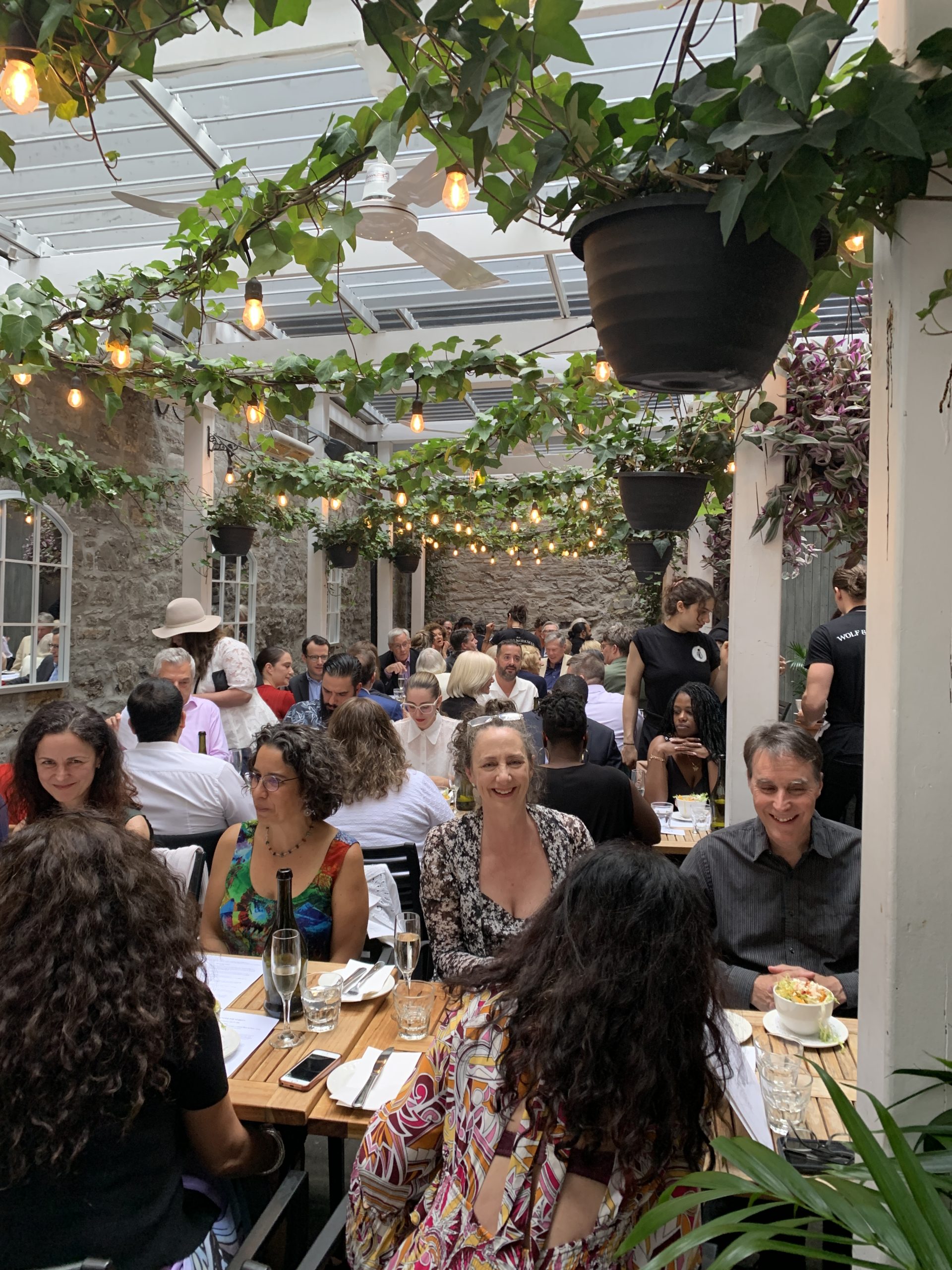 Montreal Under the Stars

There was nary a cloud in the sky on the sun-kissed evening of June 8th, as Centaur Theatre and its Board of Directors hosted MONTREAL UNDER THE STARS, an intimate fundraising soirée in celebration of the return of live theatre. The evening was filled with merriment and camaraderie and ended up raising almost $30,000 in essential funds for the theatre.

Guests stepped off the historic cobblestone streets of Old Montreal onto the charming interior garden of The Burgundy Lion Group’s Pub Wolf & Workman, an elegant British-style eatery just around the corner from Centaur. In addition to donors, patrons, and other Centaur associates, the evening was also graced with the presence of six stars of the Montreal theatre scene who served as the evening’s special guests. These included multidisciplinary artist and performer Laurence Dauphinais, playwright Steve Galluccio (creator of the hit play Mambo Italiano), set and costume designer James Lavoie, as well as actors Marcel Jeannin, Richard Jutras, and Antoine Yared. The first of many toasts of the night was to everyone’s good company and to the thrill of being able to finally gather in-person once again with a close community of theatre artists and theatre lovers.

Once guests sat down to enjoy a delicious three-course meal featuring dishes cooked to perfection by the skilled and gracious staff of Wolf & Workman, Centaur Board members Silvia Galeone and Anna Giampà, Co-Chairs of the Event Committee, thanked everyone in attendance for their generous support, in particular corporate patrons Fednav Ltd. and Manulife/Manuvie. The mic was then passed to Centaur’s Artistic & Executive Director Eda Holmes, who gave an exciting, top-secret sneak peek of Centaur’s upcoming 54th season. Ooh’s and aah’s could be heard around the room as Eda teased the audience with information about some of the projects that will be gracing the floorboards of Centaur’s stages later this year.

As the twilight hour approached and the libations continued to flow, the night kicked into high gear with the exciting live auction, stewarded by auctioneer extraordinaire Marcel Jeannin. Centaur’s generous patrons pulled out their wallets to bid on some enticing prize packages, including an all-included weekend staycation in the Old Port, round-trip train rides to Halifax and Stratford, and a pair of bottles of some of the most coveted and critically acclaimed wines in the world. Everyone was so caught up in the excitement and Mr. Jeannin was such a convincing salesman that some guests were even bidding against themselves! The final prize of the night, and the cornerstone of the auction, was an intimate evening with Mr. Steve Galluccio, won by two of Centaur’s luckiest patrons.

The night wrapped up with more drinks, more toasts, and lots of laughs. As they picked up their parting gifts on the way out, many guests commented on how nice it was to finally be able to gather once again in-person and to mingle with the actors and artists who bring Montreal theatre to life. Centaur and its Board of Directors were proud to host such a lovely and well-received soirée and are excited to do it again soon. Vive le théâtre!