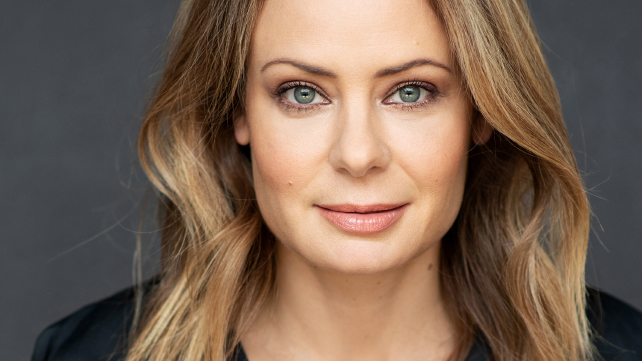 If you’re a fan of the popular French prison drama, Unité 9; tuned in to Boomerang for a weekly giggle; caught the play À présent here or its English counterpart, Right Now, in the UK; saw her in the French version of La meute at Théâtre La Licorne; then you know the accomplished Québécoise actor and writer, Catherine-Anne Toupin. The Boomerang star, creator and writing supervisor is a bona fide household name in French Canada, but her fame factor is about to increase with the English language world premiere of MOB.

Centaur Stage: You graduated the Conservatoire d’art dramatique de Montréal in 1999 and now you’re a well-known actor/writer whose work is seen in various languages in many countries. How did that happen?

Catherine-Anne Toupin: After graduating, there’s very little work for a new actor, especially a woman. You’re usually cast as a prostitute or a stripper, so not long after graduating, I and two fellow graduates, Frédéric Blanchette and François Létourneau—now renowned actors, directors and playwrights—founded a theatre company called Théâtre ni plus ni moins. This is when I realized how important it is to have a voice, especially as a woman. I started writing short plays in 2000 and completed my first full length play, L’envie, in 2004. Most of them are suspenseful and very funny but also very disturbing … they sometimes end very badly [wink wink]!

CS: How did MOB make its way to Centaur?

C-AT:  One of the first people I met in the lobby following the 2018 premiere of MOB at La Licorne was Eda. She loved it and said she wanted to bring it to Centaur. It was a beautiful moment to get that kind of enthusiastic feedback from a respected artist. Some of my plays have been done all over the world but never in English Canada, however Eda has really been a champion for this play from the start.

CS: What considerations were important regarding the translation of La meute?

C-AT:  Chris Campbell has been my friend for 14 years. We’ve worked together often and have the same sense of humour. MOB has a lot of dark humour and it was crucial that the translation capture the nuanced language which draws audiences into the story and to characters. I knew Chris would duplicate that delicate comedy-tragedy balance.

CS: As a celebrity, have you ever been threatened or harassed?

C-AT: Not personally but in Unité 9,  when Guylaine Tremblay’s character lashed out violently after three seasons of abuse, the public completely rejected her reaction; she got a lot of hate mail. That made me look at my own writing and I found that I was sometimes writing women as soft and forgiving “victims”. I was angry at myself and that was the key. I had to write about a woman who refuses to be a victim. I’m not saying all women should behave like Sophie, but nothing changes if we don’t. Fiction allows us to see ourselves differently, react differently. Sometimes it gets ugly but we must look, because stories can reveal something we need to understand about ourselves and our world.

CS: What was your writing process?

C-AT: It’s a bit weird. I knew I wanted to play with people’s assumptions about victims and perpetrators. My subconscious pursued me with images of the characters. I saw a man and a woman playing, having fun, until something shifts. By the time I sat down to write, I had a clear arc but I continued to discover more about the characters—like finding missing puzzle pieces—and within a couple of months, I had a first draft.

CS: This could have been an intense two-hander. What purpose does Martin’s aunt serve?

C-AT: Louise represents the public. She’s us, who don’t really know what’s going on. She’s also a buffer so that Sophie feels comfortable staying at the B&B and Louise’s relationship with her nephew lets us see that he’s a sweet guy. We like him and that’s essential to the story.

CS: Do you prefer writing or acting?

C-AT: Acting! That’s why I let the images pursue me for months before I start writing. Acting is more fun, you’re in a group, interacting and helping each other. I write projects that I can act in but that’s just a part one of my self-expression. As a writer, I love having a voice and making an impact, but once the script is written, part two—getting into the rehearsal hall and working with actors and the text—that’s when the fun begins. That’s where I feel most at home.